This week’s Shared Topic on Blog Azeroth comes from Cymre of Bubbles of Mischief:

If Blizzard added your main as an NPC in WoW, where would they be located and what would be their function? Give us a shot illustrating the fact.

Finding ourselves at the end of the Cataclysm expansion, semi in limbo and awaiting the announcement of the release date for Mists of Pandaria, I find myself still disappointed with the absence of closure on a few things.

Neptulon, angry over getting the shaft

The first is definitely the Abyssal Maw raid, as I am very disappointed that all poor Neptulon got was a bit part in one dungeon.  In fact, nothing in his storyline is really closed – Ozumat and the Naga escape to harass him another day.  As, in the bid to control the seas, I doubt the the Naga give up that easily. 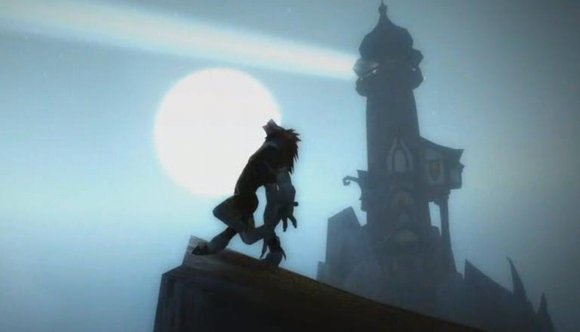 Second, and by far more disappointing in my opinion, was the lack of closure to the Worgen storyline.

You start your character along this great story path full of earthquakes and Forsaken and plagues and Night Elves and at the center of it all – a werewolf-like curse.  You sabotage the Horde’s efforts, but not quite in time to save your homeland from the Forsaken’s plague.  So you are forced to flee with nothing save your very life with the help of the Night Elves, who offer your people sanctuary as a tiny penance for unleashing a terrible curse upon you and the world in general.

Then, I have to play a Horde character to get anymore story about what happens to Gilneas?  Do not get me wrong, I am enjoying what I have seen of the Horde perspective… but what about the Worgen? 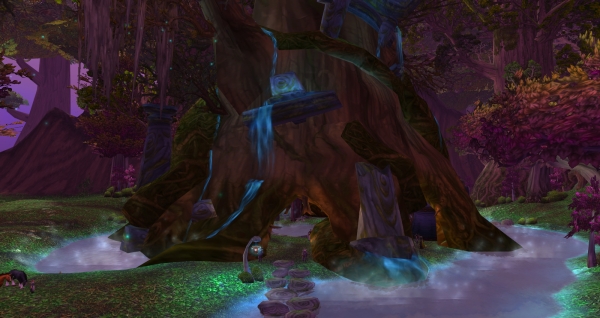 The Worgen get to run errands for the Night Elves in thanks for saving their lives.  But what about their way of life?  What about their home?  Where is the plan to drive the Forsaken out of Gilneas, now that the Gilneans have allies and some place to formulate a plan and gather resources?  Where is the outrage?  How can these semi-feral beings not be angry and seeking to retaliate?

What does this have to do with Cymre’s Shared Topic?

Before I go any further, let me first say that I had a few ideas for this Shared Topic. 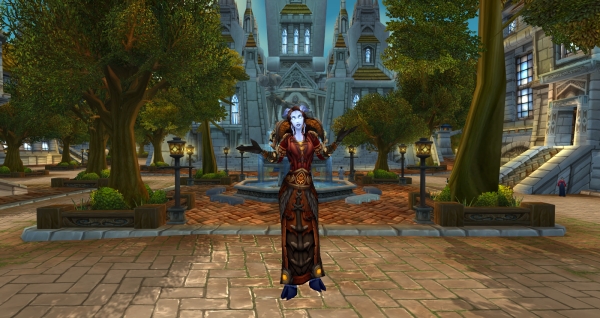 The first was of course Effy.  She is my main as well as my primary story character.  But I quickly realized that explaining my thoughts of her as an NPC would give away some story elements I am not ready to share yet.

Second, was Sir Piotr.  I am currently of the idea of making him a Goldshire quest NPC, but that is another story as well.  🙂

Finally, I realized that the Wolfsbane family has received some serious slighting from me lately.  I mean I started a series about their origin, to explain how they end up in Duskwood to meet DK Effy, and never finished it.  In fact, they were part of my primary storyline when I started this blog – the Children of Greymane and the adventures they had with DK Effy.  Basically, the story behind the characters I dabbled with when I was on an RP server.  That whole plan somewhat fell by the wayside so I could elaborate on my Effy/Effraeti storyline and my Descending Twilight series, as well as my work in progress entry for Movellas.

So, on to the purpose of this post – my characters as NPCs.

So after you flee Gilneas, the only place you really run into any Worgen-related story is in Duskwood.  There is a small group of Worgen quest givers in Raven Hill.

In fact, for a non-Worgen Alliance character, this is the only Worgen story you get.

There is also a horribly discombobulated questline involving Tobias Mistmantle, whom you originally meet in Gilneas as a newbie Worgen character.  But forget Tobias, because his Duskwood questline is so retrofitted to Cataclysm that it really makes no sense anymore, unfortunately.  Poor Tobias.

Back to Raven Hill, and my wandering point.

Finally… for all of those craving more Worgen storyline in your questing – I give you House Wolfsbane.

First, some background for those unfamiliar: 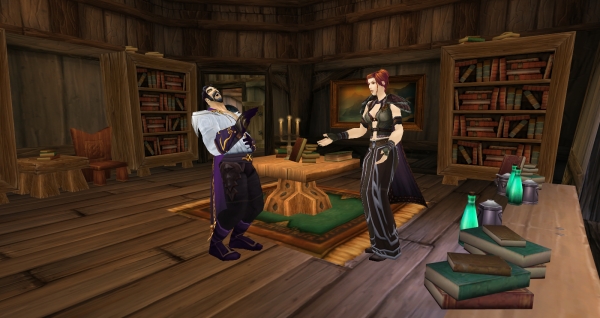 Lord Eduard and Lady Gæladrial are the heads of this family of former-Royals.  They were originally the Lord and Lady Wolfsbane of Stormglen Village before the Worgen slaughtered most of the town, and drove out the few who remained.  Lord Eduard, AKA Æthelwúlf or Noble Wolf, is a Warlock of some power and his wife is a Harvest Witch (Druid) who came from a family of farmers before marrying Lord Eduard.

Their daughters are Sifaol and Amaeris.  Sifaol is the elder and the more patient of the two.  She is a Priest of the Holy Light, but possessed of a great deal of self-importance which usually comes across as snide and degrading.  Amaeris is the younger and a Hunter.  She is more impetuous than her elder sister but kind-hearted and a lover of all animals.

All of the members of House Wolfsbane were infected with the Worgen Curse during their flight from Stormglen, but a strange occurrence befell the Lord and Lady…  Something in their blood caused them to be mostly immune to the curse.  They both have complete control over their Worgen halves, and are able to stay in human form while in combat.  The only time either changes is when they will it (mostly for traveling purposes), or when under extreme distress.

Somehow this immunity did not transfer to their daughters.

After fleeing Gilneas, the members of House Wolfsbane soon left Darnassus and set out on their own.  They heard rumors of feral Worgen in the woods surrounding Darkshire, and made that their destination.

The Children of Greymane have made it their mission to formulate and deliver a cure to the feral Worgen of Duskwood.

The questlines surrounding the Children of Greymane would be based on formulating the “cure” – definitely some collection quests and killing certain creatures and finding rare components throughout Duskwood.  The questline would progress to Eduard and Gael seeking your help to mix the “cure” and then test it on Worgen near Roland’s Doom and the Yorgen stead. 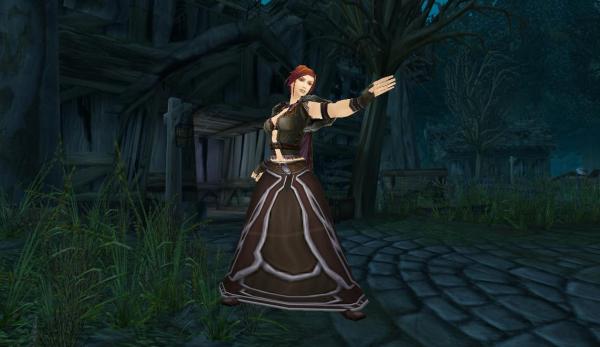 It would result in some less positive results at first, and then some more tweaking would finally lead to bringing these feral Worgen to their senses, but perhaps not able to become non-Worgen anymore, due to their extended time as feral Worgen.  (Notice I say “non-Worgen” instead of Human, because many of the Worgen in Duskwood actually have Night Elf origin, the only Humans-turned-Worgen are those infected by the originals.)

At this point, the “cured” Worgen of Duskwood would be intelligent and coherent, but probably only capable of rudimentary communication.  Still feral, but more in control.

Maybe you can see where this is going.  🙂

I see this leading to a pact between the Lord Darius Crowley’s reformed Gilneas Liberation Front and the Children of Greymane (which would now include the “cured” Worgen of Duskwood) in a fighting force to push out the Forsaken and reclaim Gilneas fully for the Gilneans and the Alliance!

And you as the character would lead the scouting and sabotaging efforts, and follow this questline all the way to the end.

P.S. – An interesting extra tidbit of information: The immunity Eduard and Gael have to the Worgen Curse was actually born of an RP reason for their lack of a Worgen form.

At one point, it was possible to “escape” Gilneas at Level 1 before being bitten and infected with the Curse.  So I had to create an RP reason around this, and it developed as part of their story in my blog pieces.  These ways of escape have since been fixed, and I recently visited Gael on Wyrmrest Accord, and she is now fully a Worgen.

Honestly, I was just tickled by a Human Druid and their cool casting animations in that regard.  Alas, it was novel.  😉

P.P.S. – Yes, yes, I know there is that NPC Oliver Harris, but he seems to give up.  So the Children of Greymane would pick up where he left off, and surely consult with him as well.

P.P.P.S. – Expect this post to be soon followed by an outfit post with a breakdown of what my Worgen are each wearing! 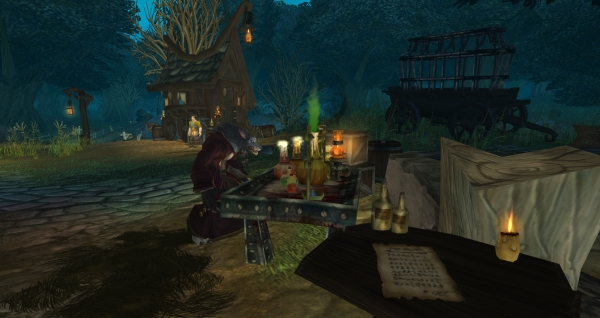